A week ago, I started a pepper seed sprouting / germination experiment.  Now, it is time to reveal the results.  There were just a few conclusions I could draw from this initial experiment, but they should be helpful if you ever try the “paper towel method” for sprouting pepper seeds.

1. The Burpee Pepper Seeds did not sprout.  None of them across all acidity levels.  I was about to write off Burpee Pepper Seeds for good, but then I checked the packages.  The seeds are old so I will give them a pass this time.  I still believe, however, that at least one of the 36 I tried should have sprouted.  Oh well, I will use them in my next pepper seed sprouting experiment and see if I can draw any multi-experiment conclusions from that. 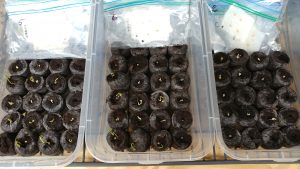 2. Slightly acidic water appears to help germination.  As you can see from this picture (5.6 PH on the left, 6.6 PH in the middle, and 7.6 PH [control] on the right), a slight acidic solution had a positive effect on the sprouting of the pepper seeds.

4. The “paper towel” method of sprouting / germinating pepper seeds works.  Other than some negative results by possibly using old seeds, most of the other seeds sprouted.

5. I will probably NOT use the “paper towel” method of sprouting pepper seeds again unless I have to.  WHAT?!?!? You just said “it worked!”  Well, yes, it did work but it was also a lot of work.  Cutting paper towels, creating solutions, placing seeds, etcetera, etcetera, etcetera.  I have a feeling that using the Sunleaves Super Starter Heat Mat and the slightly acidic solution were the real winners here, but I could be wrong.  The only way to tell, though, is with another experiment!